I wasn???t really happy with how my ASCII nude???s gallery One thing that bugged me the most was that it was hard to find a certain piece and that the selection was somewhat confusing. The confusion came from overload. I wanted to put too much stuff into too little space. I added a couple months ago the feature of having the selection boxes with the image thumbnails of the 100 ASCII art pieces scroll horizontally, which looked nice, but did not really help with the usability. So I removed it again (It wasn???t with Internet Explorer anyway).

The selection is now again a grid (10 x 10), as it was at the beginning. See the partial screen shot of gallery page below where you can see how the grid looks today. First thing you will notice is that there is only one thumbnail image for each ASCII now; instead of two (the second thumb was showing the image with white font on black background).

The second thing you will notice is the larger preview thumb which is 400 pixels high for vertical pictures and 400 pixels wide for horizontal pictures. The preview thumb appears when you hover over one of the hundred mini thumbnails (which get???s highlighted when hovered over). There was a bug with the highlighting border of the picture that is currently shown in full, which I believe I got fixed now as well. 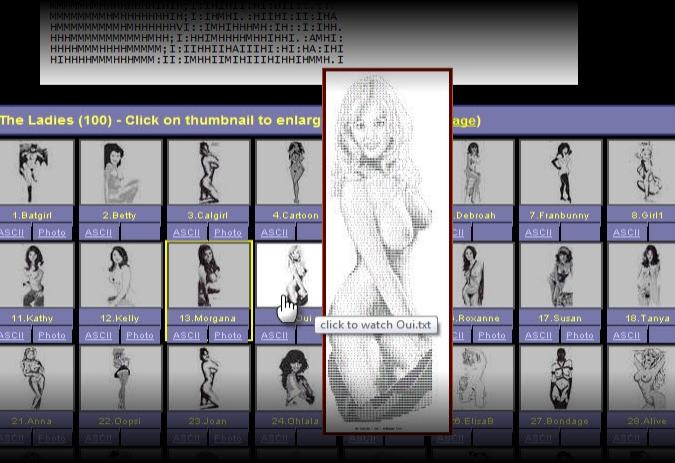 From the grid are you still having the fairly new features that I did not add with the current change but a couple weeks ago already, which allows you to open (and save or print) the original ASCII text art piece in a separate window. Simply click on the text link ???ASCII??? below the thumbnail of the picture. If I found the original photograph of picture that the artist used as model for his ASCII, a text link labeled “Photo” is shown right from the “ASCII” text link also below the thumbnail. That photo is also opened in a new browser window.

If you wondered what happened to the option to look at the ASCII with white font on black background instead of black font on white background, no worries. The feature is still there, just not accessible directly from the main selection grid. You can access this alternative version, if you clicked on a thumbnail in the grid to load the full size version of an ASCII. Above the ASCII are now two buttons. Automatically selected is the first button labeled “White Bg“. Next to it is the second button labeled “Black Bg“. Click on that and the visual presentation of the ASCII will change from the white/black mode to the negative or inverse black/white mode. See the illustration below, which shows this nicely. 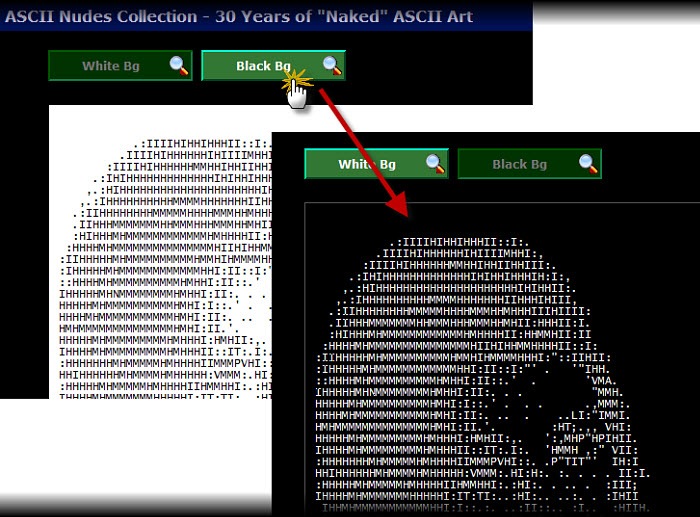 I also would like to remind you of my special post, where I show side by side the ASCII art pictures where I found the original model photograph (50 of the 100 ASCII???s as of today). That post focuses specifically on the comparison of the original photograph to the picture and thus offers some view options that are not available from the main collection page and grid. A good example would be the special image that shows in a single picture the original and the ASCII side by side. There you can also get a picture snapshot version of the ASCII, if you like to have that, for the use elsewhere (like a presentation slide or video or whatever).

There are still 50 ASCII art pieces where I have not found the model/source photograph yet.

Your help is still needed, if you would like to do so. You can find out more details about what you could do at this post of mine, which is specifically about the “What” and “How“.

I found a few more nude ASCIIs, which I want to add to my collection eventually. However, I am still looking for more. If you have any that I do not have in my collection yet, please let me know and send me a copy or a link to the place where I can download it. I only look for authentic ASCIIs and not for any current day automatic conversions of photographs that were done with an Image 2 ASCII converter.

Let me finish this post with two of my favorite nude ASCIIs where I have unfortunately not found the original photograph that was used by the artist as model yet. Do you recognize them and could point me into the right direction? Post it to the comments below. I???d appreciate it. Thanks.

I continued to tweak the gallery even further. Now it is also much easier to access the original photo or picture that was used by the text artist as motive for his ASCII as well a the side by side comparison of the ASCII with that original photo were it is available. That???s available for 50 of the 100 ASCIIs.

I added them to the selection bar where I already had the options to switch between the different display modes and the link to download the original ASCII text file. Oh, I also changed the layout of that download link to distinguish it from the display options selectors and to better indicate that it is triggering a download in a new browser window.

The screen shot below shows the triggered ???View Photo??? option.

The second screen shot shows the triggered ???Side by Side??? option, where you can see the downscaled versions of the original photograph or image next to the ASCII version of it.

I hope that you will also enjoy those latest updates and enhancements of my ASCII Nudes gallery.