Good Article Nomination and the Day of Independence

It is Wednesday the 4th of July 2007. Today is a holiday, Independence Day. I have some work to do, but I also did something that is dear to my heard.

It is today almost exactly one month after I posted about the struggle with the featured article nominations for the article to search engine optimization at Wikipedia and the article did appear on the Wikipedia homepage for everybody to see. 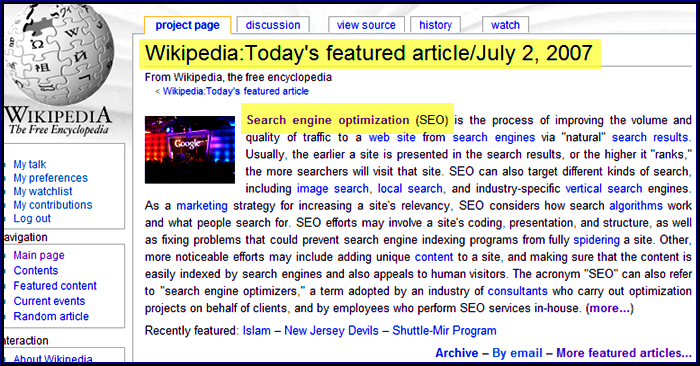 That was two days ago on Monday, July 2, 2007. Jonathan Hochman aka ???Jehochman??? at Wikipedia did a good job there and also spent a lot of time on the article to get it up to the level of featured.

That an article to a subject like search engine optimization gets featured at Wikipedia was very encouraging. You must consider that a number of Wikipedians think less than favorable about anything related to monetization and internet marketing.

I spent a lot time myself on the article to affiliate marketing, which I nominated end of last week for the status of a “good article” (I step before “featured article”). The nomination process is currently on hold to do some tweaking and tuning of the article. Especially help with the grammar is needed and a bit rephrasing work for a few things here and there.

Graeme Bartlett is the editor who is doing the review of the article. He gave me some useful tips, including where to find some practical help. One is a new project within the Wikipedia project “Business and Economics”, which is called “Collaboration of the Month” (Beta). I made my plea for help with the affiliate marketing article there and hope that it will be considered.

The number of active editors dropped over time and I am now the only one left who seems to care. I hope that I can get at least some people to go over the article for plain and simple spell and grammar checking. If you read this and are willing to help out, head over to Wikipedia and read the article. If you find any errors, go ahead and edit the article to fix the error immediately. I would appreciate it.

Let???s see how it goes. In the meantime, I would like to wish everybody who is living here in the United States a happy 4th of July and hope that you have or had a good time with your loved ones.


Update July 11, 2007
More information about the “Good Article” status at Wikipedia. To put things into perspective.

The article to affiliate marketing failed again the nomination for good article. Everything was taken care of, except for some issues with the writing style and Grammar. No editor who is good with the English language reacted to my requests for help. It’s sad.