I created a bunch of Intros via the OSDM ??? Oldskool Demomaker by Peace of Testaware, which is based on the FX Lib for Pure Basic by Epyx. You can enjoy and even download every individual production that I did in my OSDM section of the site, but that can get very tedious.??

So I decided to release a pack with most of my intros that I created in the year 2009, where you get them all at once in a single package. I wanted to use the ???Megademo??? tool that comes with OSDM by default, which works, but had some short-comings that I was not happy with. All intros were executed in the same resolution in Full Screen and in the order that I specified. You cannot jump to a specific one, worse, you have to jump through all of them first in order to be able to exit the collection. With 28 intros in my collection, that was not an option.

So I programmed something myself, using Pure Basic. Details and links to download my Megatro 2009 here.

It is nothing fancy, but it shows a logo, plays some tracker music by DAC/SAC in the background and lets you select, which intro you would like to watch via cursor keys in an interactive menu. I also included a NFO viewer for my release NFO file, which I plan to extend on.

The Menu stays active when you select an Intro to run, but the menu music is stopped. Once you exit an intro via pressing the ESC key, you are taken back to my menu where you left off. Press ESC once more or select ???Quit??? via your cursor keys and it exists the menu as well.

It was my very first program written in Pure Basic so please forgive me, if it has any bugs and may not work properly on every Windows computer.

Screen Shot of the Megatro 2009 Menu 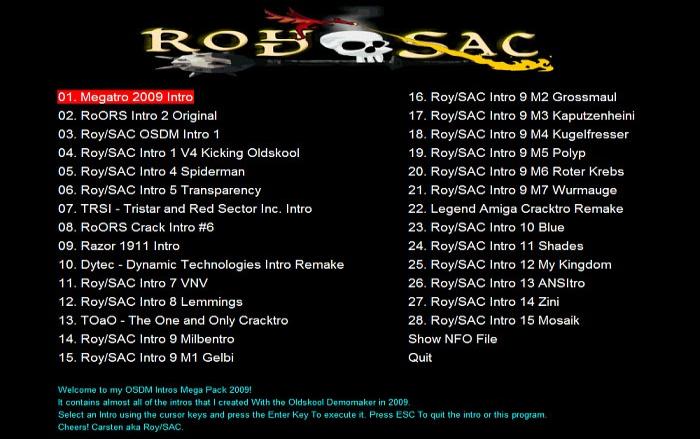 As an extra bonus I created a special intro just for this release, which I hope you will like too. Here is the video capture of this special intro.

Not included are two versions of the first ROoRS cracktro that I created in Spring 2009. I have video captures of those and also executables to download, but the problem is that those intros, compiled with an older version of OSDM cannot be exited via ESC key or any other key or mouse click at all. It must be terminated via Task Manager what sucks. I also cannot recompile the intros with the current version of OSDM anymore, because they are using the Vector Direct effect, which does not work for me under Windows Vista nor Windows 7 64bit. Also missing is one older version of my first Roy/SAC intro. There I have the same problem as with the ROoRS intros.

I also revamped the OSDM Section of my site where I showcase all my creations. It used to be one page only, which grew and grew and probably started to cause some problems to load for some due to the massive amount of embed video players on a single page. The section now has a homepage with general information and individual sub-pages for each production. Jumping from one production to the next is easy via the menu navigation tree, which is on every page hidden by default (except for the homepage)?? and made visible via a click on a button when needed.

I also added a resources section that is useful for anybody who already uses the Oldskool Demomaker himself or plans on using it. You can find there links to collections of fonts, logos, music and more, which are great raw material for your very own OSDM production.

Enjoy the Show and Have a happy new Year