It took only ages, but I finally managed to get it done, the complete list of SAC Intros/Cracktros/BBStros that were released in the SAC Art Packs between December 1994 and May 2007 are now up on the site where they belong. Well, not just a list, that would have been not a problem and could have been done in one afternoon. 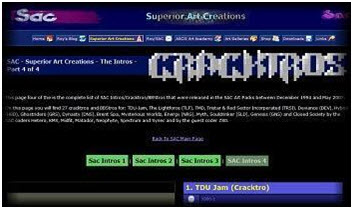 For each intro are detailed credits shown, links to the SAC art pack where they were released, links to resources, like the tracker modules, pixel logos and font graphics and other goodies were also added, where I was able to extract them, find them on the Internet or had them on my hard disk.

I was able to capture most intros in video format, since most of them are not running under Windows 32 let behold Windows 64 bit anymore. You can watch the videos right from the listings page, download the original videos in AVI or WMV format (from my file share at watch them on YouTube where I also uploaded them to my SACReleases channel on YouTube and added a link to the intro.

There were over 90 cracktros, bbstros and invtros, which I first had on a single page, but I then realized that having users load a page of several MB in size might not be such a good idea after all and decided to break it down intro multiple pages??? 4 pages to be exact. Here are the links to the 4 new pages:

Below is an illustration of how it should look like*

* I tested it with Microsoft Internet Explorer 8, Mozilla Firefox 3.5 and Google Chrome more or less and believe that it works fine and hope that this also covers the browsers that I have not tested directly myself :O.

I will keep my fingers crossed. Please let me know, if you notice anything unusual or a straight forward bug. Thanks in advance, I???d appreciate it. 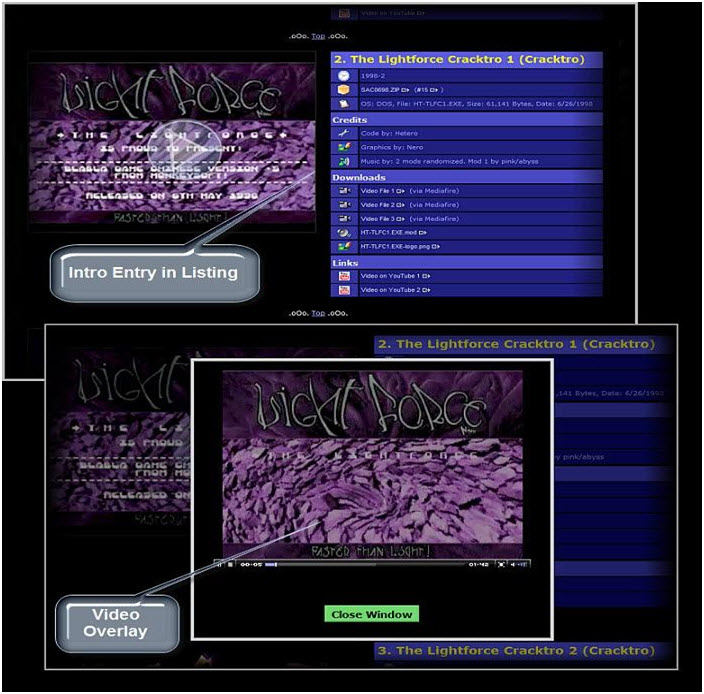 The air conditioning broke again, the second time this year and temperatures are again rising to 90 degrees Fahrenheit (over 30 degrees Celsius) in my apartment. This does not make want to write much more. The computers also start to overheat anyway.

That???s it??? Yeah, a short post.. not doing the occasion justice, but then its normal, that if something took particularly long to accomplish, you tend not to have much to say about it afterwards.?? Update Note: I updated the SACtros page with the SAC Pack Intro videos to match the look and feel of the SAC Intros pages. It???s also cross referenced with those pages now.

The old look was nice and unique, but I have to admit that it was a) not that user friendly and b) was more experimental (along with the bugs that come along with an experimental web page hehe).