« Where is the Delirium DVD by Cirque du Soleil? - ASCII Art Nudes versus Original Playboy Centerfolds »

Time for Another ASCII and More

It has only been two months, a bit less actually, since I created my last piece of ASCII text art.

Well, I did it again. Actually more than just a logo as I did the last time for CPI. I also design the NFO file body and more. I will show you the details further down below. I am pretty proud of myself, because I did not use any of my old styles for this new ASCII. I tried something different. I think that the result is very good, but it will be for others to decide if that is the case or not.

I also created a FILE_ID.DIZ logo for them in oldskool ASCII (Amiga style), which I do not consider myself particular good at. I actually said always that oldskool ASCII’s should stay where they belong, on the Amiga, where they look right and not on the PC, which displays them much different as you can see at my article about the different art styles in the underground text art scene. 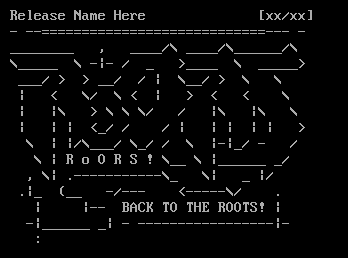 While I had the creative urge going, I also created VGA pixel logos for the same group. It must have been their lucky weekend I guess. hehe.?? It could also be that the release that they announced where this artwork will be used was highly motivating for me

The second VGA logo. Simple and much smaller than the first one. It can also be read much easier.

The VGA logos were used for a cracktro, together with an old pixel art font of mine, which I highlighted in a blog post last December. The font took me hours to create and I was a little bit disappointed that it was only used for one Genesis intro, coded by Synec, which was only used for one or two releases and that’s it. That particular intro is also one of the few that I have problems with to capture and publish in video format

I am glad that it was now used again. The music is also cool. It was created by Paso from Berlin and Dytec (and Dynamix & Remedy, the Sysop of Ice Cream and the coder & musician of the Cebit1993 party winning Amiga 500 dentro called Vaginal Massacre).

The tune was also used on the PC once, also for a Genesis intro by Hetero, with graphics by Dream Design, together with a second song, which IMO sucked. A randomizer determined which of the two songs was played and it appeared to me that the shitty song was played much more often than this cool one by Paso. I am sure that he will be glad that one of his tunes was used again in a cracktro.

Okay, here is the screen capture video of the new cracktro:

You can download the video in AVI format (76 MB) here at Mediafire.com??

I hope that you like my new stuff. Cheers!