Star Trek, The Experience is Gone!

You heard correctly, Star Trek – The Experience is gone … where no Star Trek Experience has gone before …?? into oblivion. I just returned from Las Vegas today.??

I was at the Hilton Las Vegas yesterday and shocked to see that the Star Trek Experience is now closed, not for maintenance, updates, NO … FOREVER!!! It is actually closed already since September 1, 2008. WTF?

Okay, I did the Experience already four times (or five, I am not 100% sure). I did it the first time in 2002 (or was it 2001?),?? when there was only the Klingon Encounter and then several times more, after they expanded the Experience with the Borg Invasion (4D) ride in early 2004 (I always liked the old Klingon ride much more, but then I also liked only the Original Series and Next Generation and never got into DS9, Voyager or Enterprise).

What a loss! … and probably only because some greedy bastards could not agree on how to share the profits.

The Experience wasn’t cheap (about $25 until 2004 and $40 or so, after they launched the second ride. Okay a bit less than that, one or a few bucks, but that does not matter anymore), plus the revenue from the gift shop and the overpriced “Quarks” restaurant that served TGI Friday’s kind of food for twice the price and half the quality. Not being profitable could not have been the reason for shutting it down after over 11 years of operation.

It’s a shame and Gene Roddenberry, who passed away in 1991, did obviously some poor decisions regarding who and how the franchise that he created, will be managed after his death. What a blow and slap into the face of Star Trek fans worldwide. Gene would turn in his grave (bless his soul), if he’d know about this.

I bought some Star Trek stuff at the gift shop myself. A plush bear (star fleet commander), a small Tribble (from Star Trek, the original series) and a shirt with a Star Fleet Academy logo on it. Here are some pictures of it. The Tribble makes actually a sound, if you press it hehe. I don’t know where you could buy this stuff now, because the gift store at the Hilton is gone like the rides, restaurant, bar and museum. The online store and web site StarTrekExp.com is also down now 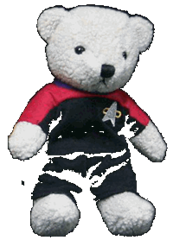 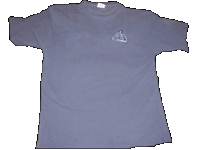 I am glad that I “forced” a friend of mine, an American who grew up in Chile and worked at my former employer with me, to go to Vegas and do the Experience, before he went back with his wife and kids to live in Chile. He was/is a huge Star Trek fan and even wanted to do this Star Trek wedding (but the wife was not so thrilled about that and said no). I knew that he would regret it for the rest of his life, if he had not done it, so I forced him to his luck. Now it’s gone and he wouldn’t have a chance to do it anymore. I am sure that he will appreciate my persistence a few years ago even more now.

That’s a lesson for anything in life. If you really want to do something, don’t leave it an open item on your “to-do list” for too long, because of stupid excuses, just do it, or you might never get the chance to do it at all.