I am really mad! Things get worse more and more. I still did not have the time to write my planned article about the current issues with the existing copyright laws and their inadequacy for the real social web world of today.

I am staring since Saturday at a suspended YouTube account of mine (my main one at YouTube.com/CarstensVlog). I cannot log-in to the account to check messages etc. and all of my 160+ videos under the account are not accessible. 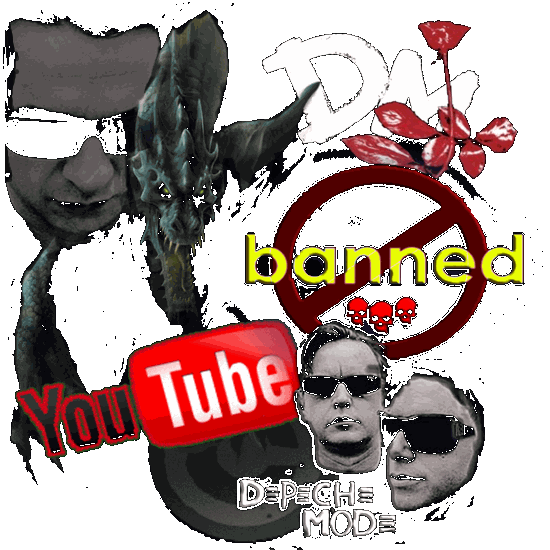 The “nice” thing is that YouTube did not even bother to send me a notification about this. They just suspended the account. I wrote them an Email and also sent a fax asking why my account was suspended and that they enable it again. I got a few hours earlier an email from YouTube about the removal of one of my videos due to infringing the copyright of Depeche Mode. I had six Depeche Mode videos uploaded under my account, five of them were the different music video and live versions of my favorite DM song “Never Let Me down Again”. The Sixth song was the 1988 live version of “Everything Counts” at the Rose bowl in Pasadena. They were all added to my account about 9 months ago.

One of the DM videos was already taken down in March (3 months ago) where I asked YouTube who exactly claimed the copyright and requested to take the video down. I also asked to get a copy of the 72 user comments the video had acquired that I can send it to the band and ask them, if this is what they consider infringement of their copyright and harming their record, video or concert ticket sales?

YouTube was not willing (or able, or both) to provide me with those comments.

And now also the take-down of the second video and to top it all off, the suspension of my YouTube.com account. Are all my videos infringing copyrights? “No” and “Jain”. The “Jain” could be made a “Yes” technically, but if a TV station grabs a promo video of somebody and airs it without asking for permission, that somebody is very unlikely to sue the TV station for copyright infringement… more of the opposite would be true, that somebody would probably be thrilled and happy. It’s like writing a press release and a newspaper actually picks it up and publishes it. I am surprised that marketing material (which is intended to expose as much people as possible to) is not automatically treated like a press release, but I am not a lawyer to be able to answer that question.

Guess what, YouTube, who is quick to take crap down without checking is always slow when it comes to responding to the inquiries and communication of the content publisher. This is not the first time. YouTube took down in the past a video from a different YouTube account of mine on behalf of a company who did not own any rights on the video at all. The video recording of the MS DOS PC demo was released under what we call today “creative commons”, but without using the legal gibberish. Back when it was released, creative commons did not yet exist as far as I know. In that case YouTube did also not bother to respond to or put the video back up. I re-uploaded it again with a nasty message to the ownership-thief to check first that you really own anything about a video before you claim it to be your own.

I am also mad at Depeche Mode, who I expected to know better than this.I used to be a MySpace friend of the band and sent them a long message via the MySpace mail system yesterday. They have probably their henchmen reading the messages for them and give a crap about the rant and unhappiness of a 22 years long fan of the band. At least Ronan from VNV Nation is reading and responding to his messages personally. I also talked to Ronan and Mark from VNV about copyright stuff and they are much more realistic and relaxed about this.

I will now post my message to Depeche Mode that I sent yesterday at MySpace, before I removed myself from their MySpace Friends list.


Subject: Disappointed and Pissed off, thank you and well done

I made all video versions of my favorite song of yours “Never let me down again” available on YouTube in shitty 320×240 resolution. I took it from ALL your concert and singles DVDs that I own. I also added some personal comments and details to the description to express my support and love for you.

The videos attracted many comments and multiple discussions and sharing of memories and experiences. Really good and heartwarming stuff.

On April 25, 2008 was the first video taken down, the 1987 singles version, after being up for over 6 months and attracting 72 comments (real comments, no junk and no spam). YouTube stated that “Depeche Mode” was claiming the material being infringing.

I am sure that you never looked at the published video yourself. I even doubt that your henchmen look at the stuff and simply filtered videos by name.

Yesterday was the live version from 2005 taken down (Touring the Angel, Live in Milan). That is not all, my account at YouTube was suspended yesterday too, My account with over 160+ videos and only 6 of those were Depeche Mode videos. Now all of my videos are inaccessible. I did not get an email about the suspension. The last email that I got was the info that “Depeche Mode” claimed that the video (Never Let me down again, Live 2005) is infringing and taken down.

*I don’t use the “f” word lightly; it???s the second time within the past 12 months actually. The last time before now was when I got my Green Card after living for over 7 years in the United States, with a short break, where I was forced to leave the country, because I ran out of a visa because it reached and exceeded its maximum lifespan… I wanted to let you know this to put things into the right perspective.

What do you think was happening to your content? Do you seriously believe that you lost any album sales, let alone concert ticket sales as a result of the fan postings of low resolution videos of a song of yours on a video sharing site?

Looking at the responses and comments, I’d say it did the opposite. You probably had album, video and ticket sales as a result of this. I was asked to post other songs and versions of your music. I only did it for one song, the Everything Counts version of 101. I declined the other requests and responded with the info which DVD the song is on and where to get it.

I cannot believe it that I was a fan of yours since 1986 when I was still living in East Germany and thought that it will be the end of the world, because I could not get a ticket to your one concert in East Berlin in 1987 (at the Werner Seelenbinder Halle) and believed that I would never be able to see you live. Well, fortunately for me the Berlin Wall did come down 2 years later. Who???d known? A friend of mine spent the equivalent of over 4 months salary of an average East German worker to buy off a ticket from one of the guys who got a ticket. My friend was 14 t that time, I was 13. The tickets to that concert were not sold. They were given for the most part to schools and they gave it to “exemplary” good students (Depeche Mode fan or not). Most of your real fans never had a chance to get a ticket. They had to buy it off from the “good” students for small fortunes. Not many had that kind of money, I certainly didn’t even own 4 months of salary of an adult at that time.

What I have (and still have, shipped from Germany to California) is the original and only published Vinyl record with Depeche Mode songs in East Germany by “Amiga”. You have no idea how hard it was to get that.

But all that is now past and you could file it under teenage stupidity or whatever you want. I am now thinking about throwing away all my Cd’s and DVDs and even that damn Amiga Vinyl record of yours, considering your attitude towards your fans who do nothing more than evangelize your music and promote your albums, videos and concerts by publishing low quality version of your music and concert videos.

I will now remove you from my MySpace friends; however, I always had an open profile that allows messages to be sent to me, even if you are not a friend of mine.

It does probably also not matter, because I don’t think that any of you even bother to read your own emails and have just another henchman do it for you and file this message under “rants”… done, thank you very much. We appreciate your damn money and business, but give a crap about you and your stupid personal problems with us.

Bye
a former Depeche Mode Fan.
1986 (starting with “A Question of Time”) to 2008 (ending with infringing on your shit)

So… that was that. Now I still have to battle with YouTube to get my account back up again. That I am not just full of s… and make up an issue where there isn’t one can be seen, if you have a look what else is going on at YouTube and other social media sharing sites. The Prince vs. Radiohead incident for example speaks volumes, all by itself.

I will not go further into details with this post. There is a lot more to say and to point out to make you understand the whole extend of this problem. I got to start working on my post, dang it.

There is only one last thing that I would like to mention. The purpose of the Copyright law is to protect content producers from rip-offs and not getting paid for their work appropriately when they should. It also prevents the commercial exploit of somebody???s intellectual and creative property, leaving the creator out of it. The law does not exist to be self serving. If a law is either not sufficient to do what it was created for or if it harms somebody else or does not cover relevant scenarios that are becoming norm and not exception, then a change of that laws become necessary or they will create more and more harm and less and less good.