I had some fun with copyright laws over the past weeks, mainly regarding video productions I did or re-published. I experienced different things, but one reminded me of a short story that I read over a year ago in the German IT magazine “CT”, which I am still subscribed to here in the US.

I first scanned the original article, but then decided to also buy the digital version of the main article, which included this short story on the publisher???s website at Heise.de. I paid one Euro for it, even though I own the print magazine and also the PRO CD-ROMs where the story should also be on. I basically purchased the story three times altogether.

I then translated to English as good as I could to make sure that the subtle humor is not lost because of my translation. I hope that what I did was enough to not infringe on any copyright for publishing it on my personal blog. Considering that this is also only a short “box story” within a main article, fair use might be applicable as well.

Well, copyright laws and its application are not only hard to obey, but also hard to understand and to know for sure, if you are doing everything 100% alright and perfectly legal, or if something is missing and you are infringing on somebodies copyright. Even if you know what you need, is it sometimes hard to impossible to acquire it. Enjoy the story. 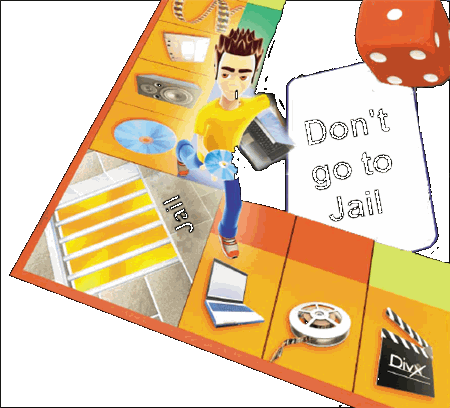 Uwe S. had a fine idea: To his 40th birthday he wanted to give to his guests a self-burned CD with thirteen of his favorite songs from the rocking 80s. To the selected belong Accept, ACDC, Bonnie Tyler, Deep Purple, Alice Cooper, Bon Jovi, Stewart Floyd, Prince, Rod Stewart, Steamhammer, The Clash, The Who and the Tygers of Pan Tang.

Expected were between ten and fifteen guests – too many, to be able to consider the home-made sampler a legal private copy with a good conscience. From the campaigns of the music-industry scared, Uwe S. does not want to do anything wrong or illegal. Therefore, he tried to put his birthday-surprise on perfectly legal legs.

The reason-honest music-lover telephoned with the leading businesses of the music industry for one and a half days. Uwe S. was friendly, laboriously – and a little bit naive. Since something is written on almost every CD about GEMA (“Society for musical performing and mechanical reproduction rights”), his first telephone call was to them. The headquarters referred to the department “Audio Media-License-Industry”, which is responsible also for consumer-customers. However, it was not attainable.

Then just directly the record labels. Uwe S. started with one of the real big ones. The first question was: “How many copies do you want to make? ” – About 10 to 15 pieces. The conversation-partner suppressed a laughter audibly.

“Come on! That is a costly procedure. There you must state exactly how many CDs you want to produce, for which purpose and you would have to submit this in writing.” Uwe S. already enraged wanted to hang up, as the man noted: “Actually, I should not tell you this. Your honesty is honorable, but nobody would care about it, you understand? Uwe S. understood: For a world-wide multimedia concern are 15 CDs only Peanuts.

Maybe smaller Labels are a bit shorter on cash and would be pleased about the additional revenue. Next, Uwe S. therefore called the smallest Label on his list. They had a rocker-cornbo under contract to who he owed many beautiful memories. A friendly lady listened to his concern at first and took him really serious. ???We have done the same in the past, she confesses. However, the legal situation was not so strict earlier as well and pirates did not have to fear imprisonment as a penalty.

“Millions of people” do “this every day, the lady soother through the telephone. “A private copy is legal anyway.” One, yes, but 15? “That is a gray area! The record companies will never find out if you do it.

With a correct license, Uwe nevertheless would feel better in his skin. After all, the musicians should get something in return, for complimenting his young years so devotedly. He already becomes almost mulish, however fails because of his good will: “That is praiseworthy, but something like this would be expenditure even for me. Quite honest, even if you put in such an application, we won’t waste our time with it.”

Uwe actually should become an Illegal-copier and should risk that he might spent his next five birthdays behind “Swedish Curtains” (in prison). “You must decide this for yourself. Maybe you should give away flowers instead.” Then the lady adds quietly, that this conversation never has taken place.

The next one on the list is again one of the pretty-big record-companies. Among other things, he administers the works of a small, though spirited artist, who was “really big” in the 80s. First reaction to the inquiry: “Ah. One must clarify this first and let himself give a number to the call back. After a short time “formal statement: We cannot approve this.” And unofficial? “I cannot tell you anything informally.”.

Apparently, Uwe S. had interpreted the powerful emphasis of the word “officially” incorrectly.

The third big company called, admittedly promised to call back, but, however never did. But not everything was lost just yet. Five of the artists were under contract at the probably biggest record company in the world. It, however, referred the becoming birthday-child to the GEMA quickly. And this, although the GEMA, if it would have been reached, does not even has the necessary rights to give the required permissions.

Uwe S. called the GEMA over two dozens of times. After a while did he not even noticed the busy signal anymore. Again and again, did he try it also through the front desk. “I am sorry, but somebody is using the line at the moment, please try the direct line.” When the line was free eventually, the announcement that nobody is responding, followed after a few beeps invariably.

Now, Uwe S. sits helplessly in front of the telephone, without an answer for his problem, how he can legalize his sampler. No one of the conversation partners had the obvious idea that he could buy the titles at a commercial download-service like Musicload.de (or iTunes) in order to then burn it on the allowed number of audio CDs. Such an attempt would have failed anyway: Not all artists are available online for purchase. AC/DC, for example, is only available at brick and mortar record stores. (uma)


Translated from German into English by Carsten Cumbrowski