« You Can’t Stop Progress! Lessons from the Past - Stats for Fun »

Schwags, Addictions and T-Shirts Acquired For Other Reasons

A colleague in the search marketing space with the name Tamar Weinberg had a “coming out” and admit her addition to “SCHWAG”, the stuff you get for free at conferences or other promotional items sent to you by companies.

She dedicated a whole blog to her addition where she posted pictures and comments to all her trophies. Guess the name of the blog! … right SchwagAddict.com! Uh, that was hard.. hehe.

I have some trophies myself. I also extend the definition of Schwag a little bit and include promotional material where I actually paid money for the privilege to carry somebody else’s name or logo around for the whole world to see.

This pic shows the front of a BuyMusic.com T-Shirt (“get loaded”, which has obviously 2 meanings here hehe), a Levelclick shirt, a Techsmith Snag-It Sweatshirt, which reads “Capture, Edit, Share” and can have a double meaning

), the front of a CT-Magazine short (“rtfm”, which has actually only one meaning), a SES San Jose 2006 shirt, a Mister-Wong.com shirt (top right), a The Party 1997 short where I paid actually money for and a BDN shirt, which I had to earn (I won the fast-ANSI compo at BDN Party 3 in Berlin, Germany). You can also see some other stuff there, such as the “I’am feeling lucky” License Plate frame from Google (which they offered free of charge on their site at some time). 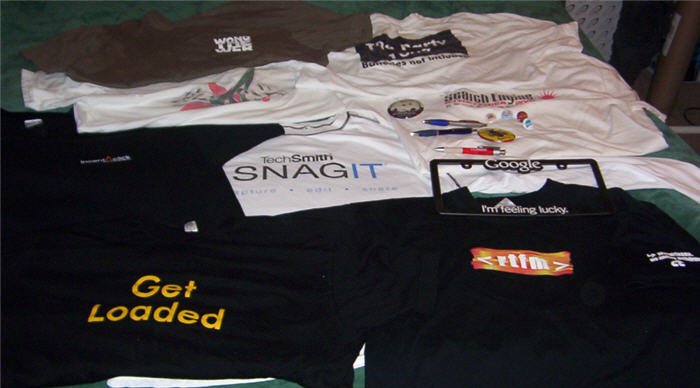 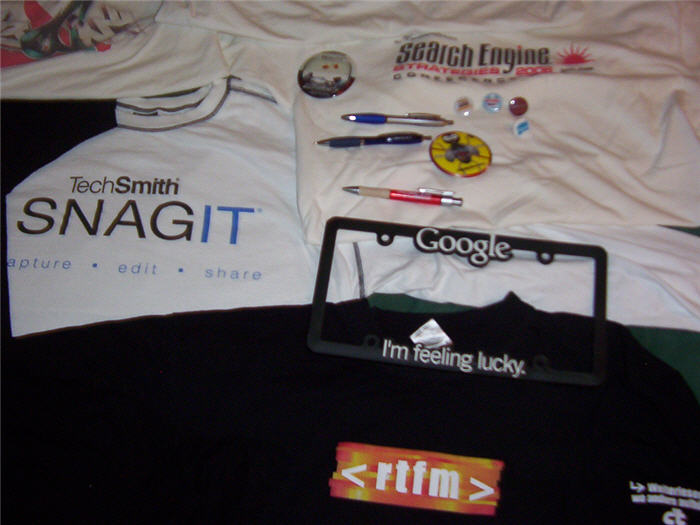 Back of the Levelclick t-shirt saying “Stop Guessing Start Earning!” and front of the BuyMusic.com shirt. Also on the picture pens from Techsmith, WebmasterWorld PubCon and TheBlindNetwork.com.

Okay, here you can see what the “rtfm” on the CT-Magazine t-shirt means hehe. I won’t spell it out here. CT is a German computer magazine btw., which is great. I still have a subscription and get it delivered here to the U.S. 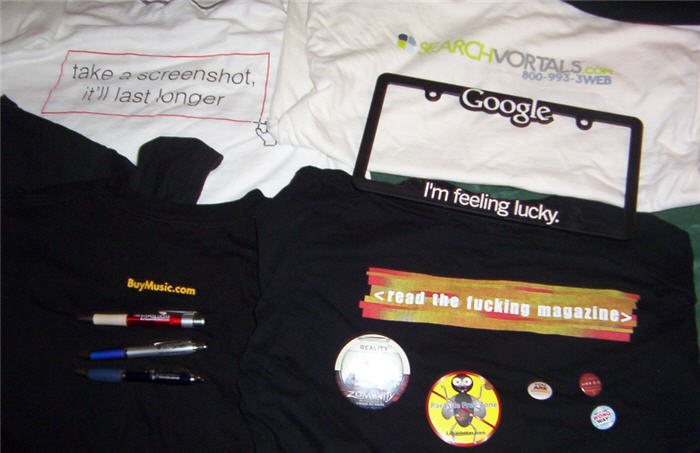 Again the BDN shirt and a VNV Nation shirt (paid) and a The Party 1998 shirt (also paid). I had to throw away my The Party 1993 and The Party 1994 t-shirts unfortunately. They were damaged beyond repair from wearing them. 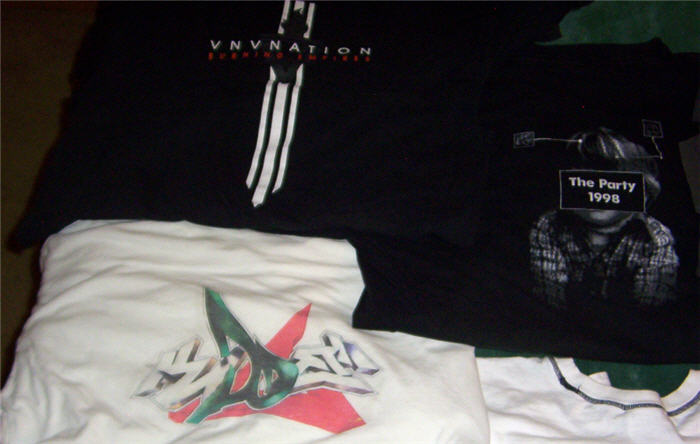 Mister-Wong.com shirt (got it via mail for my suggestions and feedback during their U.S. beta), The Party 1997 shirt again (“Batteries not included”), SES shirt and BDN shirt with not so shiny colors anymore. 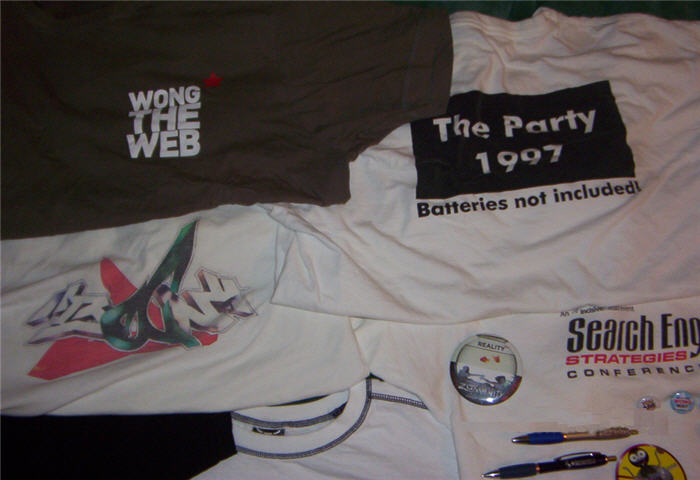 TP98 shirt, Snag-It sweatshirt back side “take a screenshot, it’ll last longer” .. oh ah.. okay hehe. Up in the corner my Star Fleet Academy shirt, which I bought at the Star Trek Experience shop at the Hilton in Las Vegas. 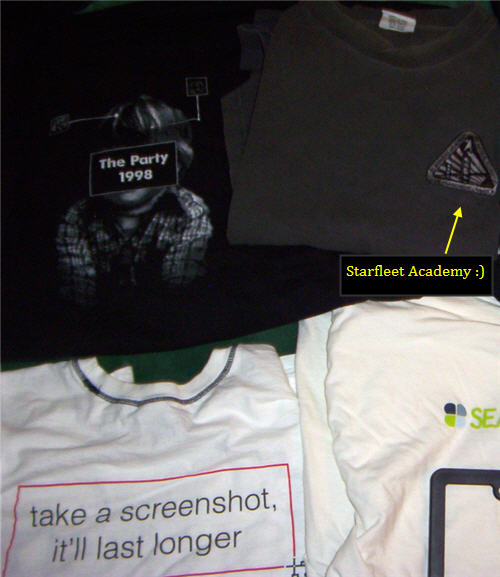 Oh, did I mention that I am a Cirque Du Soleil fan? 😉 Here is the proof that I am meaning it! … but wtf? What does the Google “black shirt” there? Spamming the CDS? God damn it! hehe. 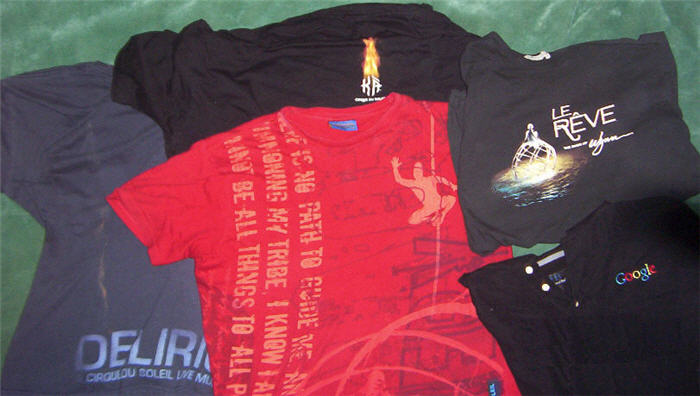 Okay, the shirt on this picture were also all paid for. My deviantArt.com shirt, my Defcon worker shirt (I got two), an “Ex-Sysop” shirt in Amiga Oldskool ASCII characters and the two custom print T-shirts that I had made at Defcon. See my post about it. 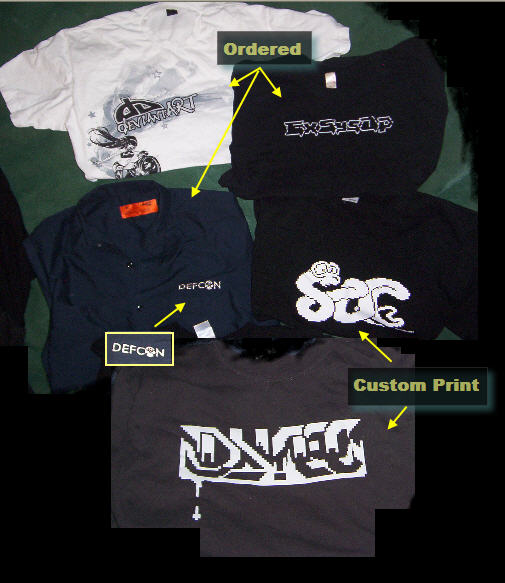